The news is something a lot of Xbox console players have been waiting for. The online play requirement with Xbox Live Gold, in my opinion, was fine or necessary back in the day. The original Xbox Live Gold was there to help build and maintain a network of servers that allowed us gamers to enjoy security, stability and fun online gameplay with others. If you remember the equivalent PC services for online play when compared to Xbox Live were a joke and then I would of been mind blown and worried a bit if I read this title Xbox Live Gold Requirement Removed for Free To Play Games

Modern Warfare 2 was a great example of how different the quality of online play was between console players on Xbox Live network. The servers were crappy and slow plus full of hackers with no punishment in sight for them. I was in favor of paying for the Xbox Live Gold to play because it came along with some nice discounts for games and specially when games became mostly digital I was all in, but I did see that besides the discounts paying for the online multiplayer felt a bit too much.

I believe Microsoft now is big enough and with Xbox being taken more seriously within Microsoft they don’t really have an excuse for charging for online play besides, maybe, keeping hackers away due to a pay wall and the Gold Deals, but besides those I don’t see why since they are both huge! Microsoft can afford to keep their servers running and running well.

Microsoft and Xbox want us to go straight to the Xbox Game Pass Ultimate instead of anything else in their offerings since the future of Xbox is not consoles, but Xbox Game Pass itself. They have, like I have been saying for a while now, transcended the console wars and they do not really care if they sell more Xbox consoles than PlayStation Sony sells PS5 since they care that they sell more services or software than PlayStation. Hardware war as to sales Sony so far has won, but the so called console war I think Microsoft with Xbox will eventually be the victor.

I hope Sony with PlayStation manages to stay relevant and strong, because competition is always good and they have created some of the best video game experiences in history. I just worry that in 10 years if something does not change they won’t the power house that they currently are.

If you have any questions related to Xbox or Xbox Live Gold Requirement Removed for Free To Play Games FAQ let me know on the socials and stay put on Streaming Live Academy for the most in depth simple to the heart video game and content creation content.

How to play Xbox Games online for free? 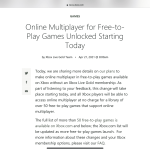 You can now do it! Xbox Live Gold Requirement Removed for Free To Play Games is a real thing and all free to play video games on Xbox are ready to go!

Are all Xbox Games Free to Play Online?