The Xbox Series X can make older games look and play much better than they ever could on the older Xbox One consoles. Resident Evil Revelations Xbox Series X Frame Rate Performance is not much different on the new Xbox Series X besides faster loading times and for that matter more stable FPS, but not by much either and here is why.

The game first came out on the Nintendo 3DS then got ported over to the Xbox 360 and it ran at about 720p – 30FPS with a later port being done on the Xbox One that brought it up to par with 1080p resolution and 60 FPS as the target frame rate.

That is a long way for a game that first got its legs stretched on the small and underpowered nintendo 3DS. The game does feel a bit old when it comes to texture models and how characters act and move, but surprisingly it holds up pretty well on the Xbox One and Xbox Series X consoles.

Resident Evil Revelations Xbox Series X Frame Rate Performance is looking to be 1080p resolution and 60 FPS on all Xbox One S|X and Xbox Series X|S with constant drops to lower 50s and rare yet predictable, sort of, drops to the higher 40s.

I invite you to check out the video attached to this article, because I can’t really explain when and how the drops to high 40s occur cause they just happen sometimes and sometimes they don’t. The game is more in line with Resident Evil 4 shooting rather than the original Nintendo 3DS first person view that would come up when you aimed which is a nice change in my opinion.

As I mentioned in the video attached to this article I’m so glad this game came out to get Resident Evil back to what was working instead of the crappy trash that was Resident Evil 6.

I don’t expect it to ever get an optimized for Xbox Series X or Xbox Series S, heck, not even the Xbox One X got a optimized patch, but we are getting a nice evenly 1080p resolution and target of 60 fps across all consoles of the Xbox Family. 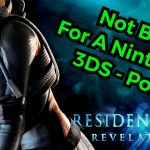