Asombo Studio did the impossible with Microsoft Flight Simulator Xbox Series S Performance levels and Xbox Series X too. The game is the showcase of what a true next gen graphics can look like by ditching the older Xbox One consoles and for good reason.

It won’t run on the older hardware mostly due to the CPU limitations, but also the legacy technology that those Xbox consoles have. Letting go of the past architecture we are able to push the boundaries of gaming even further in graphics.

The game won’t be running at 60 FPS right now and maybe never on the current gen of consoles like the Xbox Series S and Xbox Series X, but this type of game, in my opinion, doesn’t need a 60 FPS mode. I would always choose higher graphics settings and resolution at the expense of FPS for this kind of game or simulator to be more precise.

You won’t be feeling like you are playing the “cheap” version of Microsoft Flight Simulator on the Xbox Series S, but rather the lower spec version.

The game does come to around 40gb of space required to play with always on online mode, but if you have the storage space to muster it you can download and install the offline world mode file that comes around 60gb, allowing you to play the game without needing to be connected to the internet for rendering the world or map that you play in.

The world of Microsoft Flight Simulator Xbox Series S Performance is gorgeous and worth a try specially if you are already paying for Xbox Game Pass which I invite you to check our guide on how you can get the service for free if you do the official Microsoft Rewards Program.

Remember that the game does need to render the world by streaming it to your Xbox so you can choose between high quality or normal which difference between each is not day and night, but of course the higher setting does look nicer and in my testing you are looking at about 40MB per hour of playing between big cities and deserts.

You can set a limit to what amount of data you want it to use just in case you have a data cap at your house and of course you would use the lower setting for streaming quality if your internet is really bad, but for most internet speeds there shouldn’t be much issues.

In short I can say what I said at the beginning of the article Microsoft Flight Simulator Xbox Series S Performance is Astonishing and on Xbox Series X. 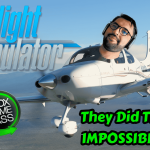 You are looking at 40gb for the base game in order to play it, but if you want to get the offline mode where it will save you some data when streaming the world map and traveling around you will need the extra 60gb install.

How Much Space Does Microsoft Flight Simulator Take on Xbox?

It will take you about 40gb for the base game and an extra 50gb for the offline mode.

Do I need to be online to play Microsoft Flight Simulator?

No, as long as you have the Offline mode installed.

How much data does Microsoft Flight Simulator use?

There are two modes for the world streaming which one is lower quality and the other is higher quality which takes more data. For 1 hour of gaming you are looking at about 40MB of world data render usage on the high setting.