Home - Gaming - 3 Steps: How To Use ps4 Controller on Dolphin Emulator on Mac?
Gaming

3 Steps: How To Use ps4 Controller on Dolphin Emulator on Mac?

Playing old classics on current gen devices is amazing and with Nintendo’s lack of interest in allowing us to play those classics in anyway besides the original old hardware we are forced to take matters into our hands so let me answer your question of How to Use ps4 Controller on Dolphin Emulator on Mac?

The answer is as simple and easy so we will break it down into 3 steps:

The version that you will want varies on what you want, but for most people the main version of Dolphin will be enough to get going with To How To Use ps4 Controller on Dolphin Emulator on Mac:

There are other versions, but if you are just starting up with Dolphin emulator and want the most stable version than stick to the public release and do not worry about it being 4 or so years old.

This is the part that I cannot go too much in to details due to the nature of the legal complexities of the handling of ROM files, but know that it is quite simple to find a good site and download them. I will share with you the ones that I have gotten ROM files from while I was working on this article/video of How to Use ps4 Controller on Dolphin Emulator on Mac.

Typically the rules behind ROM files is that as long as you own or have own a physical or digital version of the game than you are technically okay to get a ROM file of that game. I personally prefer paying for all the stuff I consume in order to support the creators, but Nintendo has made it pretty much impossible for us to play our old titles.

The Nintendo approach to backwards compatibility is laughable and a bit insulting when compared to the offerings of most other developers on the Xbox and PlayStation devices with the best examples of those devices having Master Chief Collection or Demon Souls as great Remaster offerings, while, Nintendo gives us Zelda Skyward Sword at full retail price of $60 with HD resolution and nothing else; while the other games bring in higher FPS and remaster textures and graphics as a whole.

Once you have installed the version of Dolphin that you want to tryout and gotten at least 1 game thru a ROM website and now are probably waiting for the game to download, because most of these websites are running for free they won’t give you the fastest speeds for downloads while you wait might as well get going with connecting your PS4 controller cause at the end of the day that is what we are answering here How to Use ps4 Controller on Dolphin Emulator on Mac.

(PS: If you want to get some free Xbox Game Pass Ultimate Click Here)

Once the PS4 controller is in pairing mode you are going to go to your Mac’s Bluetooth settings and look for the controller which will show up as a DualShock controller device.

Once you select it, the light strip, will stop blinking rapidly and become stable, not blinking at all. That is when you are ready to select your controller as an input device on Dolphin itself.

This is how you can get everything set up for some amazing nostalgic time with them old classics that Nintendo refuses to provide a reliable and easy way to do practically the same thing Dolphin is doing. I personally would pay for a remaster like I have been doing on the Xbox Series X and even the Xbox One consoles, but Nintendo does not, yet, offer the same or similar method for emulation fans.

If you need any help let me know in the socials below and stay put for the video version of this will be up within 24 hours. I will keep playing some Dark Souls Remaster on the Xbox Series X and enjoying more Metroid Prime on Dolphin for further testing just in case you share with me a good question and I need to find you an answer.

PS: I hope this answers you the question How To Use ps4 Controller on Dolphin Emulator on Mac.

If you are interested in gaming hardware, check this article about Cronus Zen

How To Get Dolphin Emulator? 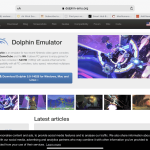 Just head over to https://dolphin-emu.org/?nocr=true and download the latest public version of Dolphin.

How to get ROMs for Dolphin Emulator?

Multiple and different websites host the files so just find one or go to this one and look for the game you want and follow their instructions on how to download it and uncompress it/unzip it then put it in a folder that Dolphin Emulator will use as the directory (place where it sees the games) or you can manually select the game iSO file and open it with Dolphin Emulator and enjoy!

Tags: Dolphin emulatorHow To Use ps4 Controller on Dolphin Emulator on Mac